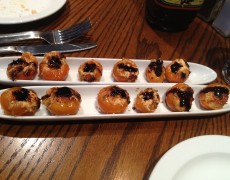 The peppadew pepper appetizer at Romano’s Macaroni Grill seemed to be pretty low-carb, but who knows? There could be breadcrumbs or other high carb ingredients that aren’t obvious.

(You can buy these in the jar or near the olive bar in some grocery stores. I like the hot ones.)

The real peppers use goat cheese, which is fine. I just happened to be out of goat cheese one day, and substituted the cream cheese. The peppers are so spicy (almost like a jalapeno

), that I didn’t notice the difference. And cream cheese is a little cheaper.

Simply take little dabs of softened cream cheese, roll them a little and stuff them into the peppers. Put on a cookie sheet

– or in a Pyrex pie plate

(which is easy to serve from after cooled). Bake at 400 degrees for about 8 minutes. 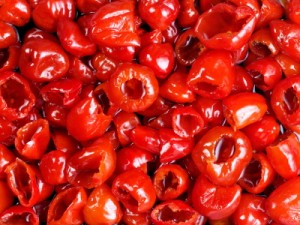 Drizzle with the vinegar.

The tough part is only eating a few!

By the way, I’m guessing on the carb count. There are 7 grams in one cup, and I’m going to guess 10-12 peppers are about a cup, depending on their size.

More from my site